Today begins the second excavation campaign at the Abbey of San Galgano in Chiusdino (SI). This year the research will be concentrated inside the church.
The excavation investigation is directed in the field by Stefano Bertoldi with the coordination of Alessandra Nardini.
The project is in continuity with the studies carried out for the Archaeological Map of the Province of Siena for the municipality of Chiusdino (1993-1995) then continued with the long construction site of Miranduolo in Alta Val di Merse – The project, active between 2001 and 2016. It is conducted by the University of Siena (teaching Medieval Archaeology; Prof. Valenti Marco) in collaboration with the Municipality of Chiusdino.

In these weeks a campaign of excavations is being carried out at the Abbey of San Galgano with the aim of bringing to light new evidences that help to reconstruct the history of this mysterious place.

As almost always happens in the course of history the evidence is literally buried under our feet because, simply, century after century it is decided to build modern structures on the foundations of old buildings. All this implies that the ground becomes a tangible testimony of the passing of time: to go back to past eras you just have to dig.

On the Archeologia a San Galgano Facebook page is documented the excavation campaign that is currently underway and is focusing on the paving of the south transept of the church.
To now, important evidence has been found that is in agreement with the evidence reported by historical documents; below we show some of the most interesting discoveries that have been made.

The black ground layer and the debris of the old collapses

The history of this place tells of an abbey left to the neglect of time for many centuries and collapses, in particular the roof, which led to an accumulation of debris on the floor. This debris, evidently, were covered by the new floor and therefore forgotten.

In the course of the morning the investigations have affected the three areas of the square. In the western limit a floor of ground and mortar US 53 was dug, which was cut by two pole holes, which probably served for a scaffolding of the restoration of the early 20th century. Below this level of trampling instead emerged a large layer of black ground (which also extends in the central part of the square), whose nature is not clear at the moment; it could be a layer of fire, or organic remains; in both cases (we will verify it tomorrow by digging it) it seems to be an activity to be connected to the phases of frequentation of the structure between the sixteenth and nineteenth centuries, when the large church was used as a cowshed, warehouse, storage.
This layer of black ground does not extend to the southern limit of the transept, where instead a collapse emerges, directly in contact with the floor, which would then represent the first phases of degradation of the church.
To the east instead, we have completed the highlighting and cleaning of the floor fragment in mezzane arranged in herringbone pattern and then we have started the excavation of a layer of strongly yellowish clay and rhinestones, also to be put in relation to the construction site of the 20s of the last century.

26 October, Area 2, Square A2
In the morning we completed the cleaning of the first collapse of the structure. This is characterized by the presence of fragments of tiles, bricks and some stones.

The most interesting news that emerged from these first weeks of excavations is the discovery of a structure that served as a support for a staircase that allowed the monks to access the church directly from the dormitories. From the photos is clearly visible a passage raised above the floor level and not accessible, unless you consider the presence of a staircase, an architectural solution also used in other monastic complexes. This hypothesis proved to be correct and, probably, the staircase was demolished to reuse that space in other ways.

28 October, Area 2, Square A2
In the eastern part of the square we dug the black level of abandonment US 63: underneath, the continuation of the level of abandonment, US 68, which occupies practically the entire square, a large pit (at the time of dubious interpretation) and the plundering of the steps (probably two) that connected the internal and elevated part of the chapel of Andrea di Giacomo with the rest of the large church was highlighted.
In the central-northern part we have instead started the excavation of the abandoned US 68, which stands directly on a mortar floor, partially restored in its missing parts with the insertion of reddish-orange clay.
In the western part, instead, the cleaning has allowed us to highlight an absolutely complex stratigraphic situation, in which the fragments of floors that we had hypothesized yesterday must perhaps be connected to another interpretation. First of all, a layer of bricks and stones emerged (probably a spoliation), aligned and of the same extension as the rectangular fragment brought to light yesterday. A similar situation is also emerging on the southern edge of the square, just below the door that connected the overlying dormitories. These evidences could be the traces of the night staircase, which therefore must have consisted of a side wall that divided the southwest chapel with the transept, three rectangular pillars supporting the staircase, which most probably must have been made of wood (a circumstance that is absolutely usual in Cistercian abbeys).
The continuation of the excavation in the coming days will allow us to verify the truthfulness of this hypothesis.

The night stairs of San Galgano
The presence of a connecting staircase between the monks’ dormitories and the large church is documented in many other Cistercian abbeys and in the specific case of San Galgano, proven by the presence of the door. As for the staircase itself, however, there were no visible traces left.
Following the excavation of recent weeks it was possible to identify the remains allowing a hypothetical reconstruction of the same in three-dimensional graphics. The staircase must have consisted of three brick pillars of different heights, functional to give static solidity to the same, and wooden beams arranged at an angle and resting on the pillars; on these beams were then housed the steps, also made of wood.
Canestrelli had already hypothesized that the structure could have been made of wood, when in his work of 1896, he wrote “the monks went down to the church through a door (which can now be seen restored in the inner south front of the transept, towards the side, at a height of about three meters from the church floor), from which a staircase, perhaps made of wood, moved, which, as in Fossanova, occupied part of the west side of the transept itself”.
The staircase was still present in 1620, when during a visit to the abbey by some representatives of the community of Chiusdino, they met the prior and some monks, who blocked their passage.
At the side of the staircase, to the west, we have identified the remains of a brick wall, very similar to the one excavated last year and which served to delimit the chapel of Andrew di Giacomo from the side corridor.
Also in this case the wall probably had the function to delimit the space of the head of the south arm of the transept from the second chapel, which we started excavating last friday.

The chapel and the fence for cattle

A drawing of 1724 by the architect Alessandro Galilei certifies the existence of a chapel with an altar and, in this same space, holes have come to light that suggest the presence of a fence for animals.

November 2, Area 2, Square A3
During the day, work was concentrated exclusively in square A3, continuing with the opening operations that began last friday. We then continued with the excavation of a layer of ground, bricks and US 38 tiles, interpreted as a level of rubble put in place to regularize the plan of the structure.
What do we know about the chapel being excavated?
The architect Alessandro Galilei, in 1724, to evaluate the state of degradation of the structure, realized a drawing with the scheme of the abbey. The representation of the room we are excavating seems to be characterized by an altar, placed on the south side (left side in the picture) and probably by a dividing wall (or a staircase?) that divided this space from the head of the south arm of the transept.
The architect does not indicate the presence of the nocturnal staircase, that instead is present a little more than a century before, in 1620, as reported by a report of the representatives of the Community of Chiusdino.

5 November, Area 2, Square A3
Once the rubble layer had been removed, we brought to light the plinths of the columns at the corners of the area, the preparation layer of the floor (which appears to have been stripped) and the pole holes pertaining to a fence or stable probably dating back to the 17th century.

There is no doubt that the Abbey of San Galgano is a fascinating place if you think of the history of Galgano Guidotti, the sword stuck in the rock that evokes legends of Arthurian memory, the characteristic absence of the ceiling… Now we know that there is still much more to discover and the comment of the person responsible for the excavation project fills us with curiosity.

(Marco Valenti).
We are going really fast with these first two weeks of excavation and San Galgano shows a lot of news.
The research is bringing out the many building seasons that have characterized it and we are still far from exploring and understanding them completely.
But the first balance reports, and above all the acquired awareness of the great potential in nuce, are already pushing us to think about the valorization.
Let it be clear that it will have to be of a high level, without being afraid.
Therefore, we will have to find a way to dig it out entirely: by sectors and over time, respecting its wide and constant public presence.
The informative potential inherent in this splendid monument, as well as its real valorization, cannot but pass through knowledge.
As Riccardo Francovich, my teacher and friend, has always said, you don’t value what you don’t know: consequently, if you don’t, the necessary narration will not be “meaningful”, but will be guiltily loaded with information not always verified and stratified in time and in the collective imagination.
The valorization then will also have to take into account, consequently provide solutions, the problems of physical “consumption” that some parts of the complex show. In addition to a generalized information layout, with a logo, and a high level of information. San Galgano needs and is worthy of a good “dress”!
But this is another story that we will deal with later. Now we understand well the church that is also providing surprises not indifferent, opening an incredible book to read.

Nice Places 3.0 is available for Android 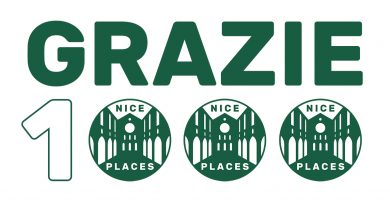 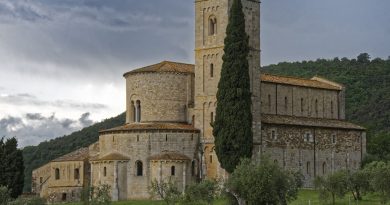