The Church of Santa Maria di Portonovo, also known as the Little Church of Portonovo, is a charming ecclesiastical building located in the province of Ancona and built on a cliff overlooking the sea of the Conero Riviera.
What remains admirable today is actually only a part of the original structure, an ancient Benedictine abbey presumably dating back to the beginning of the year 1000 (the first document traceable to the building seems to be dated 1034).
The structure of the Church, built in Romanesque style, represents a real rarity for the whole Italic territory: in fact, in order to find other buildings that can be traced back to the same style, it is necessary to move to Corsica or Normandy.
The building was progressively abandoned by the monks from 1300 because of some landslides which characterized the territory and which compromised the peace and serenity sought by the monks themselves. In particular, the Benedictine presence is believed to have ceased in 1436, following a papal bull.
The restoration work on the church began in 1894 by architect Giuseppe Sacconi and was completed only a century later, in 1995. These operations helped to make the building safe and open to the public today. 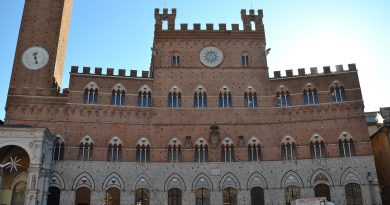