In the early centuries of the Middle Ages Sovicille was a castle of great importance. The existence of a village and a castle in Sovicille, is mentioned for the first time in an agreement of 1123, between the monastery of S. Salvatore and the Panzo, Ucherio and Ugolino families, in which an Ugolino from Sovicille appears between witnesses. In 1179, a document of Pope Alexander III indicates Sovicille as one of the places in the vicinity of the border between the dioceses of Siena and the one of Volterra. A document of 1189, issued by Pope Clement III, informs us that at that time the castle of Sovicille belonged to the Bishop of Siena. In 1226 the castle was home of a small hamlet, as we can learn from a record in the Biccherna books (an office of the State of Siena) that mentions the consuls of Sovicille. In 1313 the castle withstood the onslaught of the troops of Emperor Henry VII, but in 1333 it was taken and burned by the army of Ciupo Scolari from Pisa. In 1366 the municipalities of Pieve di Sovicille, Toiano, Trecciano, Ancaiano, Personata, Le Mandrie, Pieve a Molli, Cerbaia and Tegoia were connected to Sovicille. In 1479 its walls were restored, taking the actual form. During the war, Sovicille suffered significant damage, which probably led to the loss of some of its medieval buildings. The old part of the town is still almost entirely surrounded by the ancient walls, maintaining the original elliptical shape with a large, central square. In many houses, on the square and in the small streets, there are medieval elements. On the south side of the square there is an imposing palace, the actual Villa Lechner, whose facade has been built on the ancient castle walls. It is characterized by the spectacular play of stairs leading to a large park. The church dedicated to S. Lorenzo retains elements of its primitive structures, even if almost completely demolished and rebuilt in the second half of the nineteenth century. Inside, the only surviving wall, shows a sixteenth-century fresco, perhaps from the school of Domenico Beccafumi, with a Madonna and Child surrounded by S. Onofrio, S. Cristoforo, S. Agata and S. Martino. Outside, the base of the bell tower reveals its Romanesque origins and a carved stone lintel reused as a secondary door, located to the left of the main entrance, can be dated ninth or tenth century. On it appears an archer who confronts a dragon with seven heads, a lion and a snake, a knight with a long spear and a perhaps female figure, surrounded by signs and figures that are not easy to read. 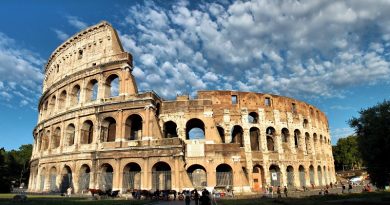 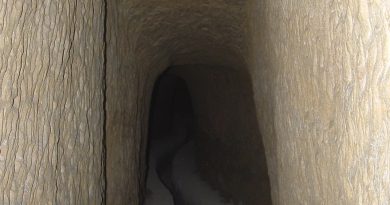 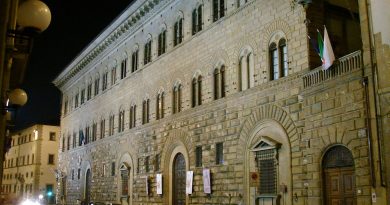