Only a few walls of its ancient castle are still present on a hill overlooking the village that developed next to the parish church of S. Pietro, today dedicated to S. Giovanni the Baptist. The church is already attested by an imperial document of 1081, which indicates the name of the parish church as San Pietro in Valle. In 1135, inside this church, Ranieri, who was Bishop of Siena, granted the monastery of S. Salvatore (today Abbadia a Isola) part of the rights of some of his properties. In 1202 the Ardengheschi family had to pay the municipality of Siena 26 coins for each of their castles, including the one of Rosia. With the end of their domain, which occurred a few years later, Rosia became a rural municipality of Siena. In 1260 the village was devastated by the Florentine troops and in 1333 by the troops of Ciupo Scolari from Pisa. The church, which at the end of the sixteenth century was given the title of Vicaria foranea, keeps intact the beautiful bell tower, which is divided into a series of shelves provided with mullioned windows with three and four lights (the crenellations placed on top are the result of a newer addition). In the fourteenth century the body of the church was object of a remake, in which the positions were reversed and the front of the church became the part behind. Therefore today the facade has, above the portal, the three Romanesque windows that originally illuminated the presbytery. The road that runs parallel to the facade is the historic center of the village, to the right, little and scenic streets develop between the medieval houses and lead up to a big building called the castle, but certainly more recent than the older castle that stood outside the village in the past. This structure consists of two parallel buildings, connected by another one, leaving a yard on the side of the entrance. Although this structure has been altered, the two buildings still show many of their original features: a high sloping base that extends from one of the buildings to the wall of the courtyard, archer and sharpshooter and traces of arched windows. 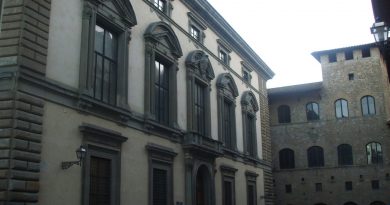 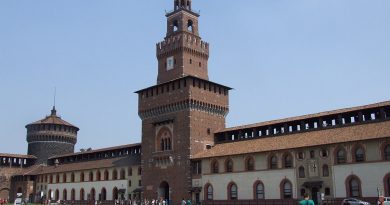 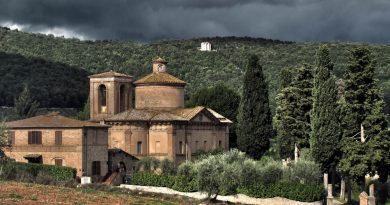